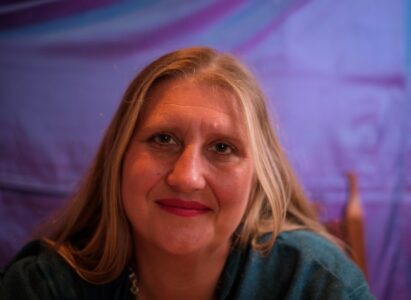 I have been reading as a Psychic since 1998, and been a healer since 2000. My grandmother was a healer, but only really used this gift with family and later told me she wished she had ‘done more with it’, and so it was no surprise to her to see that I had inherited this gift.

Throughout my childhood I was very sensitive to was happening with others, and knew things that I hadn’t been told. I didn’t realise that the insights I had were Clairvoyance, I thought everyone could do this, as it felt normal to me.  I also had a very close affinity with animals and was able to soothe animals that were ‘difficult’ or afraid, and when I touched animals or people this revealed information to me about what was going on for them.

In my 20s during the 1990s  I was given a pack of Tarot Cards and instantly knew that they would be significant to me, and that I  would be able to  do this. Tarot was a language I understood. My own learning then really began, I had a true sense of Portent about the Tarot cards, and knew they would be really important to me- and they were!  I tried to find everything I could about Tarot, and initially started doing Readings for my friends and family, revealing things to them they hadn’t told me. My predictions manifested, so it became clear that these weren’t just lucky guesses, and I really did have a gift for seeing the unseen, listen to the spirit world, and start seeing between worlds, so to speak.

I started to learn to do healing at Maidstone Spiritual Development Centre in 2000, qualifying with the Corinthian Healing Association in 2001 after my year’s training and then went on to qualify as a Reiki Practitioner in 2004. After further developing my Clairvoyance, I taught at Maidstone Spiritual Development Centre, where I ran groups to teach others how to develop their own Psychic ability.   I have been doing Psychic Readings Professionally for people since 1998.